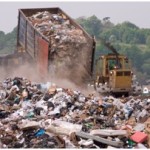 A landfill in China’s Jiangsu Province
needed an efficient and cost effective method for reducing the Chemical Oxygen Demand (COD), Total Organic Carbon (TOC), and color in their leachate in order to meet discharge regulations.  Synder’s NFW Nanofiltration membrane was employed as a post-treatment to an MBR process which treated the discharge from power plants burning the landfill materials.

The separation performance is summarized in table 2. The initial permeate flux was 68 GFD and decreased to 51 GFD when the concentration factor (VCR) was increased to 3. Initially, the TOC rejection was 92% and increased to 98% when VCR became 5 (Fig. 1). The level of COD was reduced significantly and resulted in 98.4% rejection at the end of separation. The COD in the permeate is only 42 mg/L, which meets the requirement of first level discharge standard (<60 mg/L) in China. The rejection of inorganic salt increased roughly 2.5x during the whole process (15.9% to 40.3%).

The change in pH, TOC and conductivity in the concentrated feed and permeate were monitored over the filtration process. Six samples were taken at different VCRs. The TOC in the concentrate increased from 131.1 mg/L to 764.8 mg/L while the TOC in the permeate kept relatively stable in the range of 8.2 – 12.97 mg/L (Fig. 1). The TOC rejection increased from 92% to 98% over the whole process (Fig. 1). There was little change in pH. 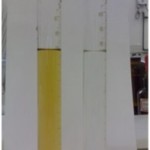 Resulting liquid is a colorless and clean liquid.  A side-by-side color comparison displays the effectiveness of the separation.

The NFW membrane showed to be very effective in removing color, COD and TOC from the landfill wastewater. The COD level of permeate meets first level COD discharge standard in China as well as the customer’s expectation.

questions? Fill out this form. We’ll contact you within 24 hours!

As global demand rises, nanofiltration technology has become essential throughout the oil and gas industry by improving the efficiency of waterflooding… //READ MORE