Fill out this form. We'll contact you within 24 hours!

Precipitation from the Vapor Phase

Once a solvent-polymer mixture is cast on the film, it is placed in a vapor atmosphere that contains a nonsolvent saturated with the same solvent. Due to the high concentration of solvent in the vapor atmosphere, the solvent from the cast film stays instead of evaporates into the atmosphere. Membrane forms by diffusion of nonsolvent into the cast film. This process results in a porous membrane.

The polymer in this case is dissolved in a solvent and nonsolvent mixture. The evaporation of the solvent due to high volatility occurs, causing the composition to have a higher nonsolvent and polymer content. The polymer eventually precipitates and forms a skinned membrane.

Phase inversion via immersion precipitation is the most widely-used membrane preparation method. A polymer plus solvent (polymer solution) is cast on a proper supporting layer and then submerged in a coagulation bath containing nonsolvent. Due to the solvent and nonsolvent exchange, precipitation takes place. The polymer must be soluble in solvent mixture. The combination of phase separation and mass transfer affects the membrane structure. 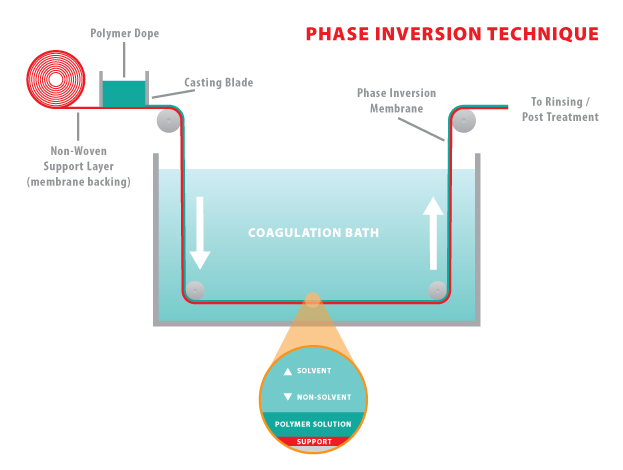 questions? Fill out this form. We’ll contact you within 24 hours!