Membrane filtration is gaining recognition in the oil and mining industry for its ability to provide a cost-effective way to reduce toxic levels of hydrocarbons, metals, and chemicals found in produced water generated from oil and mining fields. Crossflow technology with ultrafiltration membranes have proven to be effective in reducing scaling and bio-fouling tendencies, and can successfully removal most suspended solids and emulsified oils. This can be used as a precursor to desalination via nanofiltration membranes, as both divalent and multivalent ions are rejected by the negatively-charge surface of the membrane. Filtration technology provides a promising route to convert produced water into fresh water for irrigation purpose.

Synder’s Ultrafiltration membranes can be used as a pretreatment step in combination with antiscaling chemicals to prevent rapid fouling while eliminating bacteria, viruses, and emulsified oils found in the produced water. Once the Silt Density Index (SDI) is suitable for nanofiltration, Synder’s NFX membrane provides optimal rejection for multivalent ions and can produce effluent suitable for discharge to local streams or reuse in oil drilling. 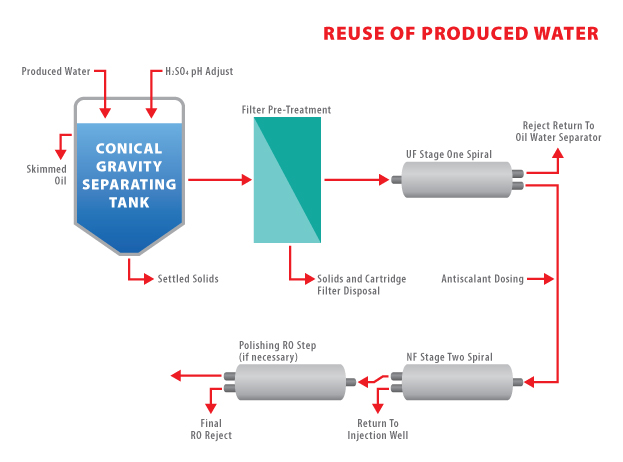